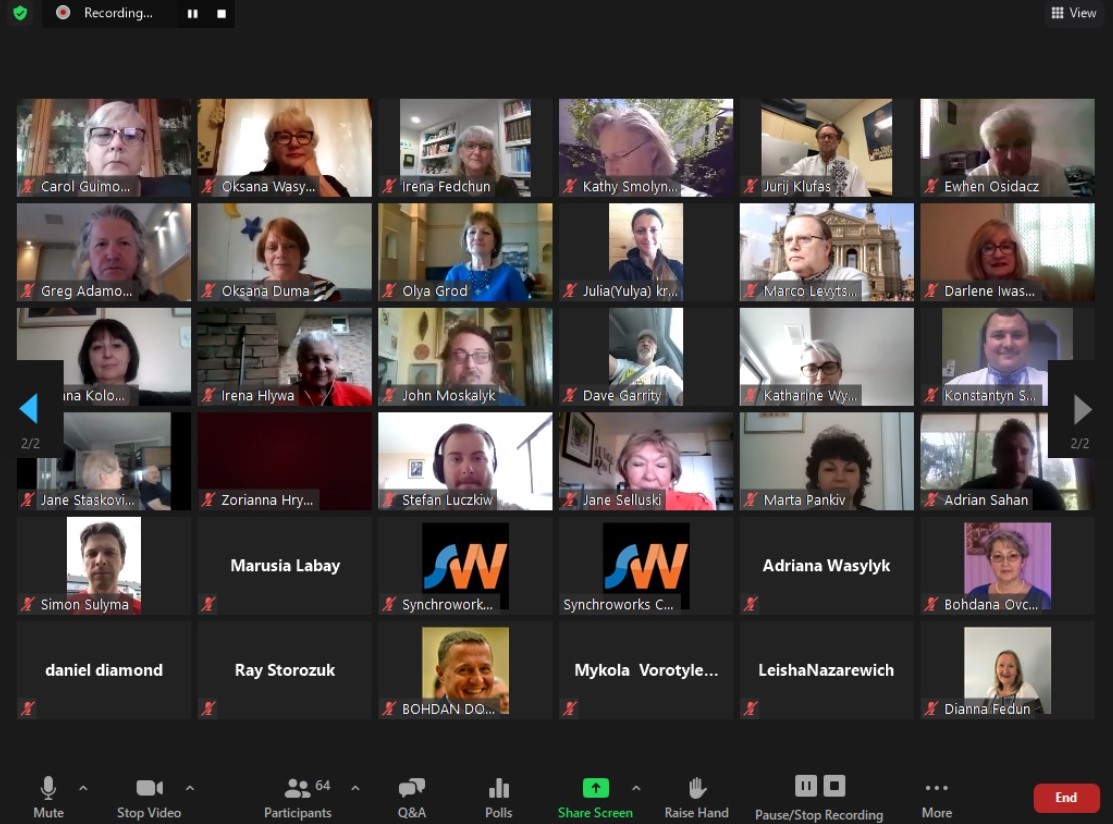 Welcome all delegates and guests from the 5 provinces that have active UNF branches and members. This is the first time in UNF ‘s 90 year history that a Congress is being held Virtually. Normally we would see each over over 3 days but now we are limited to 4 hours. I’m assuming that 90 yrs ago no one knew what “virtual” meant, let alone that it could be done from of the comfort of one’s home.I was told, that in order to be a board member in the 1930s, one had to live in a town where there was a CN train station. It probably took them a lot longer to get to the meeting than we all did this morning. My, how times have changed.

As our congress Haslo states “ Connected to the Past – Committed to the Future” this is a time for ALL to come together. Not just because of the worldwide PANDEMIC, which has forced people, businesses and organizations to PIVOT & ADAPT. Also this coming together is for the future of an organization that we all love and are committed to. Yes, we come for different provinces, some are 3rd and 4th generation Canadians, whose great-grandparents came from Ukraine, some are children of displaced people forced to flee Ukraine after WWII, some have moved to Canada within the last decade, some speak Ukrainian, others may not, some speak 3 or more languages. Some of us are in their 90s while others are joining UNF in their 20s. Some of us are graduates of the Ridna Shkola system , danced in dance groups like Kalyna & Rusalka in their youth, while others decided to join later in life as they saw a desired to help this organization and contribute to the vibrant fabric of this unique culture we call “ UKRAINIAN CANADIAN”

Resolutions of the  40th National Convention 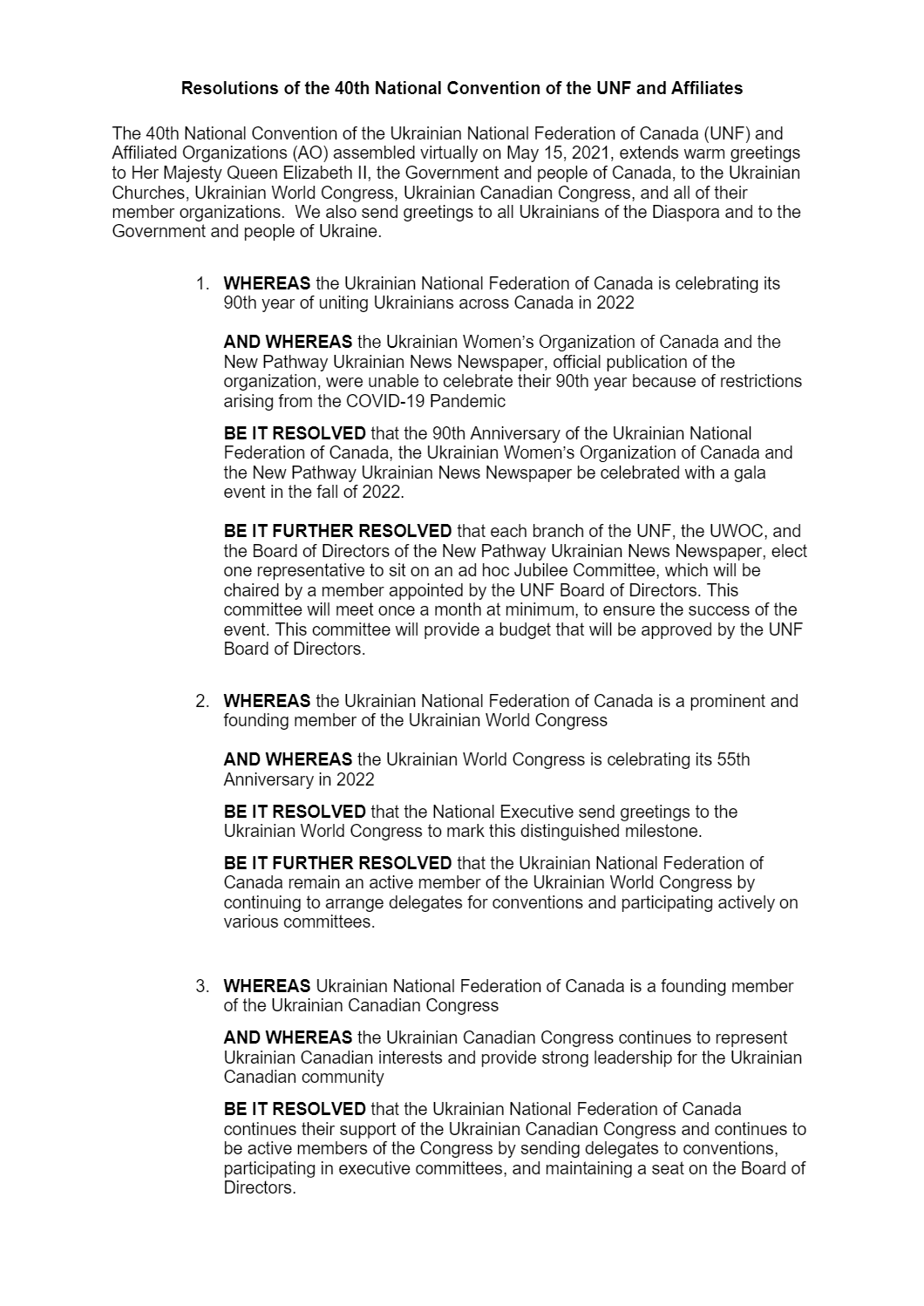 Jurij Klufas newly elected UNF National President – Slovo to Delegates
We are fundamentally a cultural institution. As ably and clearly outlined and established today in our resolutions we need to e forward and engage a professional development officer to ensure that a travelling 90 Anniversary UNF Jubilee Concert tour featuring our dance ensembles, choirs and theatre groups reaches every major city in Canada and every city where we have Branches,

This will lay the foundation for the further long term revival and development of UNF cultural activities in every Branch leading up to the huge 100 anniversary UNF National Canada Wide Gala Celebrations we should already be thinking. Strategically inclusive this will also serve further Development and leadership targets of the UNF Foundation, the Paul Yuzyk Institute and the fine Parliamentary Program that we are now stewarding.

In the mean time – we all have battles with our our many faults – and over time many people have told me, over and over again that my fault is that – I am too optimistic.

So I say to myself, OK, they may be right, maybe I should tone it down for a while.

Then after some time, I start thinking – wait a minute – what’s up here? What do you mean too optimistic?

How can you give up on something that hasn’t even happened yet?

How can something be impossible if you haven’t even started work on it yet?

…and I’m going to infect you with my Optimism!

I’ve decided that I’m going to use all my energy to infect every single one of us with the feeling that UNF is the best grass roots cultural phenomenon that’s happened to Canada.

Our past President, Renata Roman, mentioned to me in a memo that our current total national membership is just north of 500 members.

For the next three year term of this executive – I’m asking each one of you that, while you are helping with preparing the various Branch activities associated with our upcoming 90 Anniversary Celebrations – that you invite just one friend per year to join your branch.

Now, I’m not asking you to ask them to just come to your meetings.

I’m asking you to invite them to our celebrations!

In the first year I’m asking you to invite them to DANCE with you.

In the second year I’m asking you to invite another to SING with you.

In the third year year I’m asking you to treat another to the best of your Branches Ukrainian Varennyky, Borshch and Holubtsi.

Guess what? – with you bringing in just one new member per year =

at the next triennial there will be over 2000 of us!

Dear Triennial Delegates I thank you for being here and hearing me today.

In closing I invite every one of us here and every one of our members in branches all over Canada to an exiting three years of Celebration, growth and Fun! 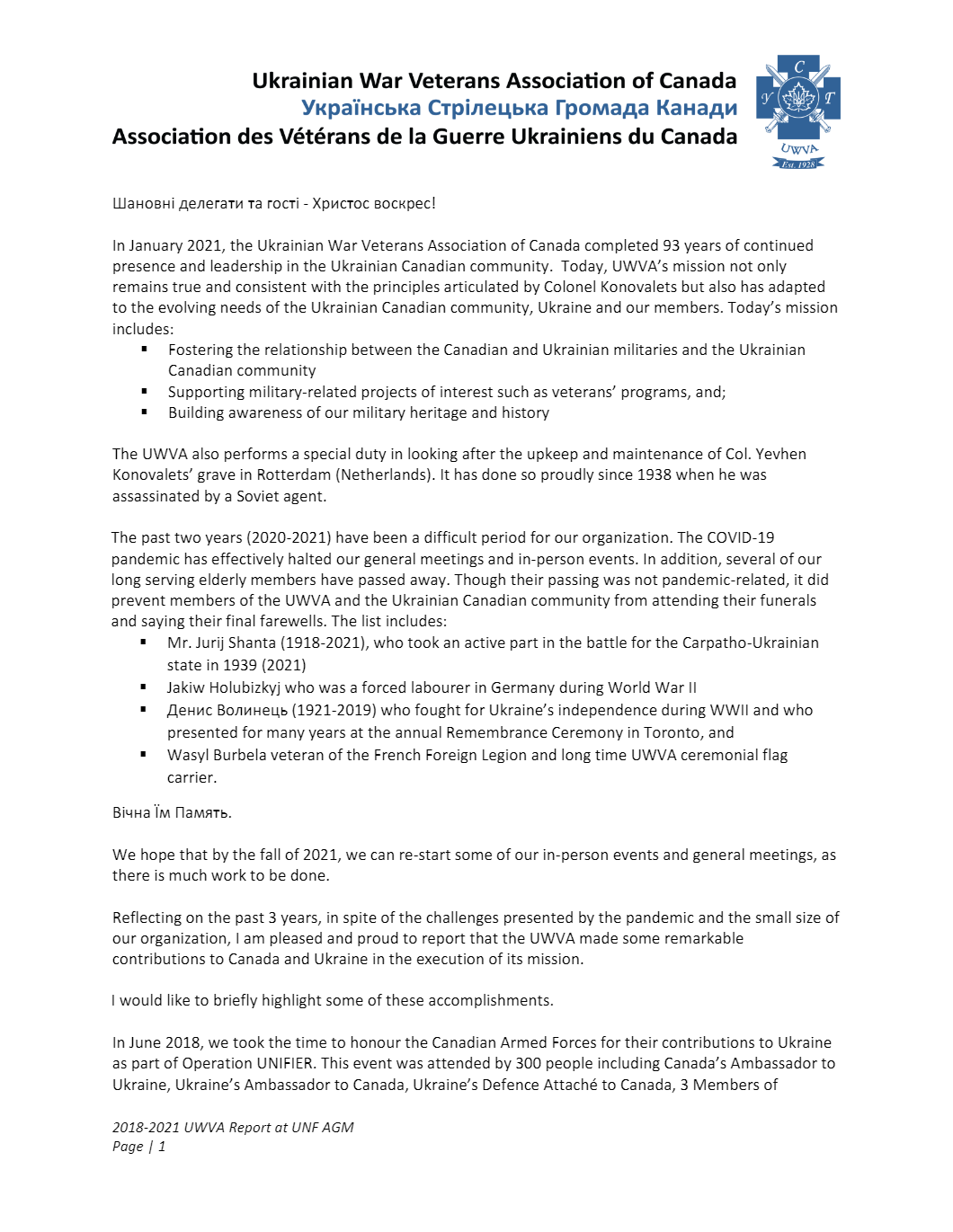 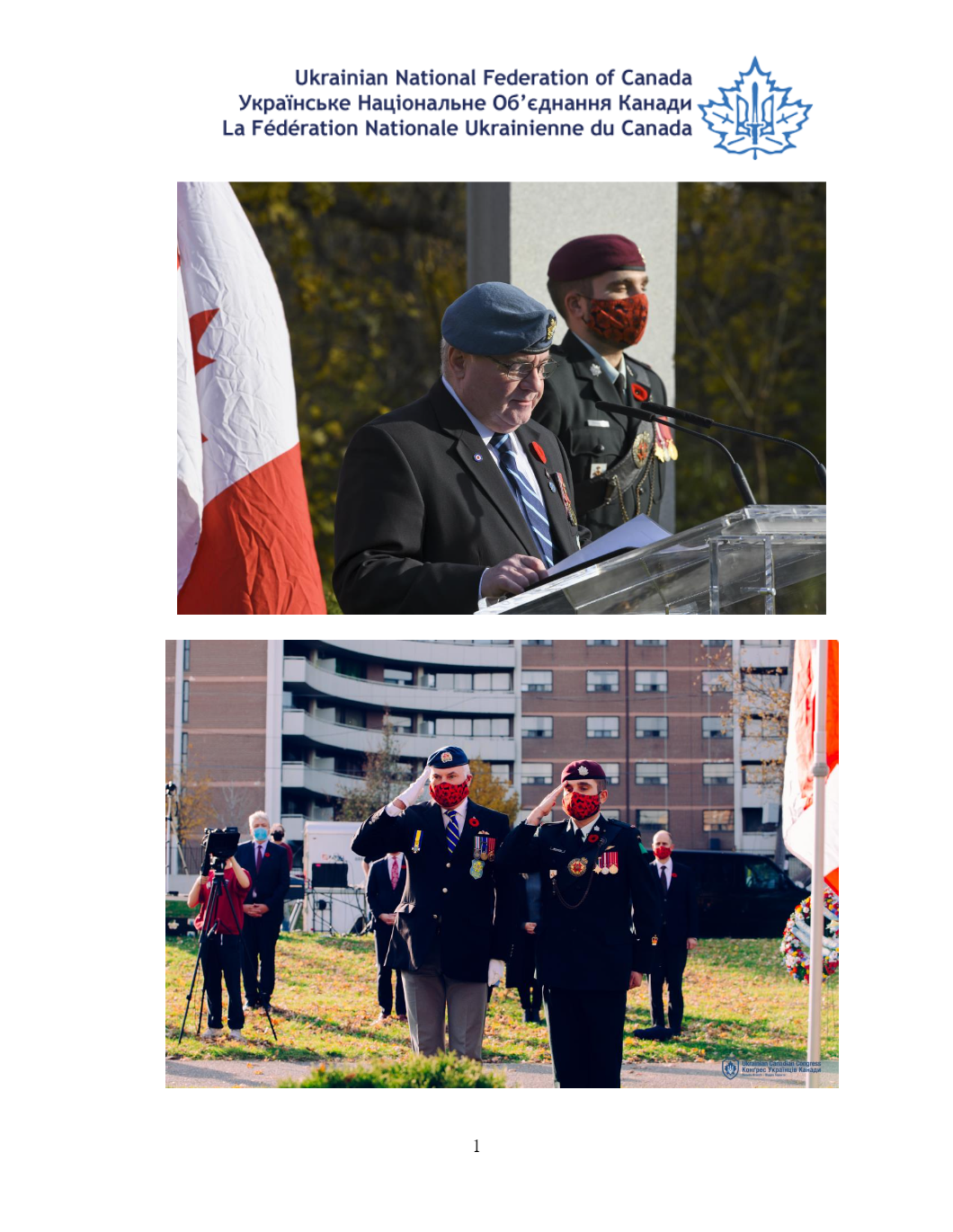 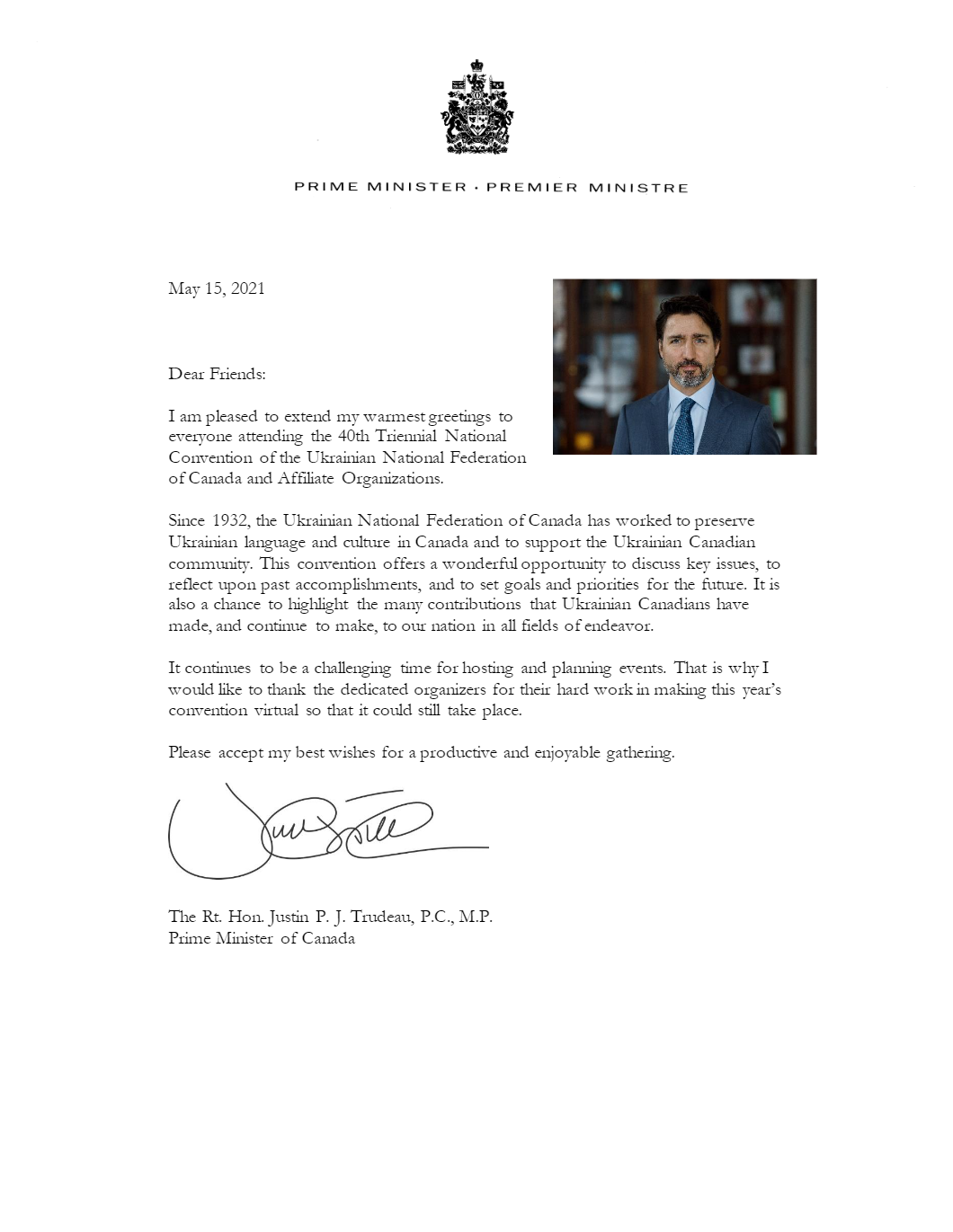 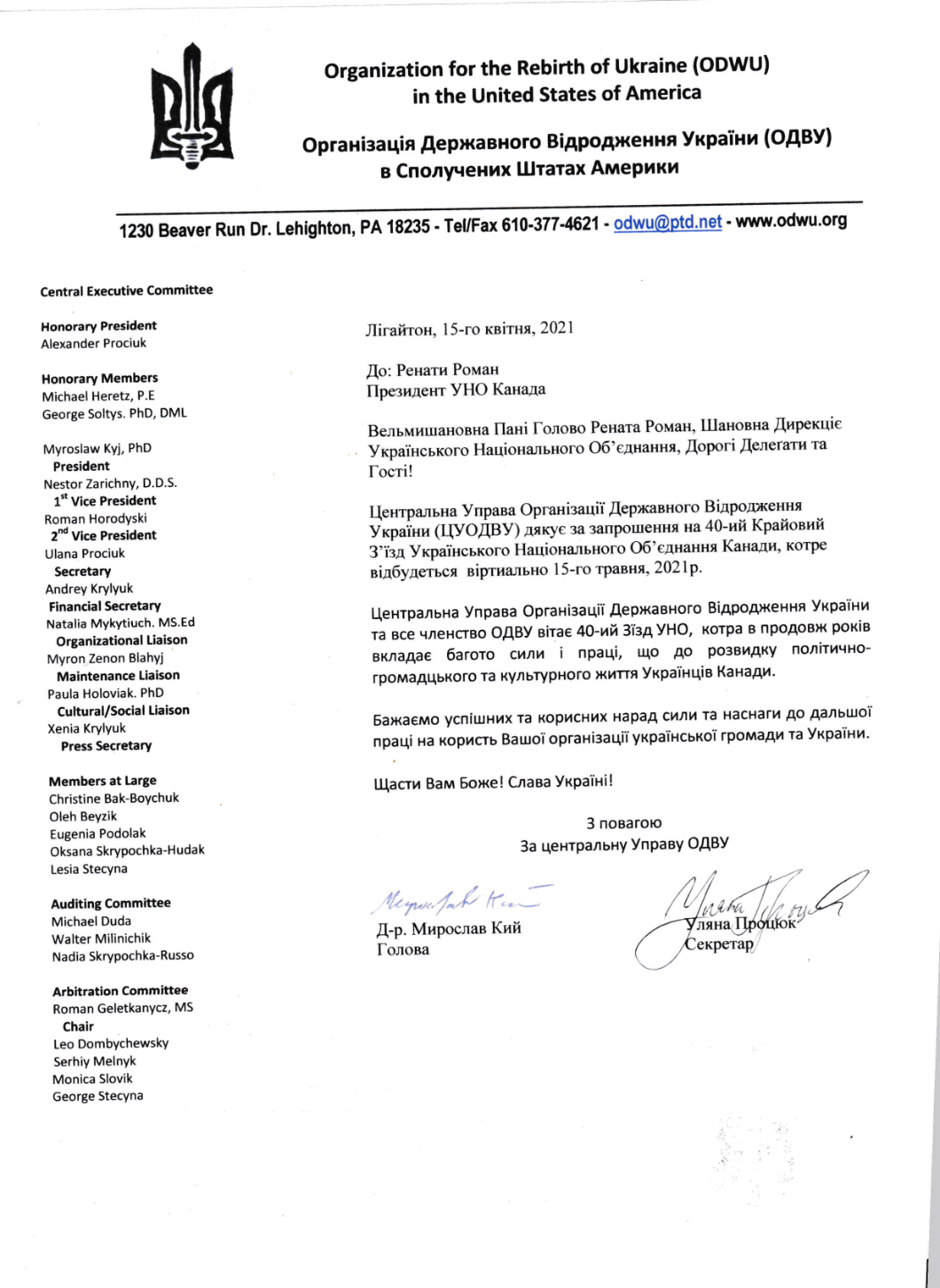 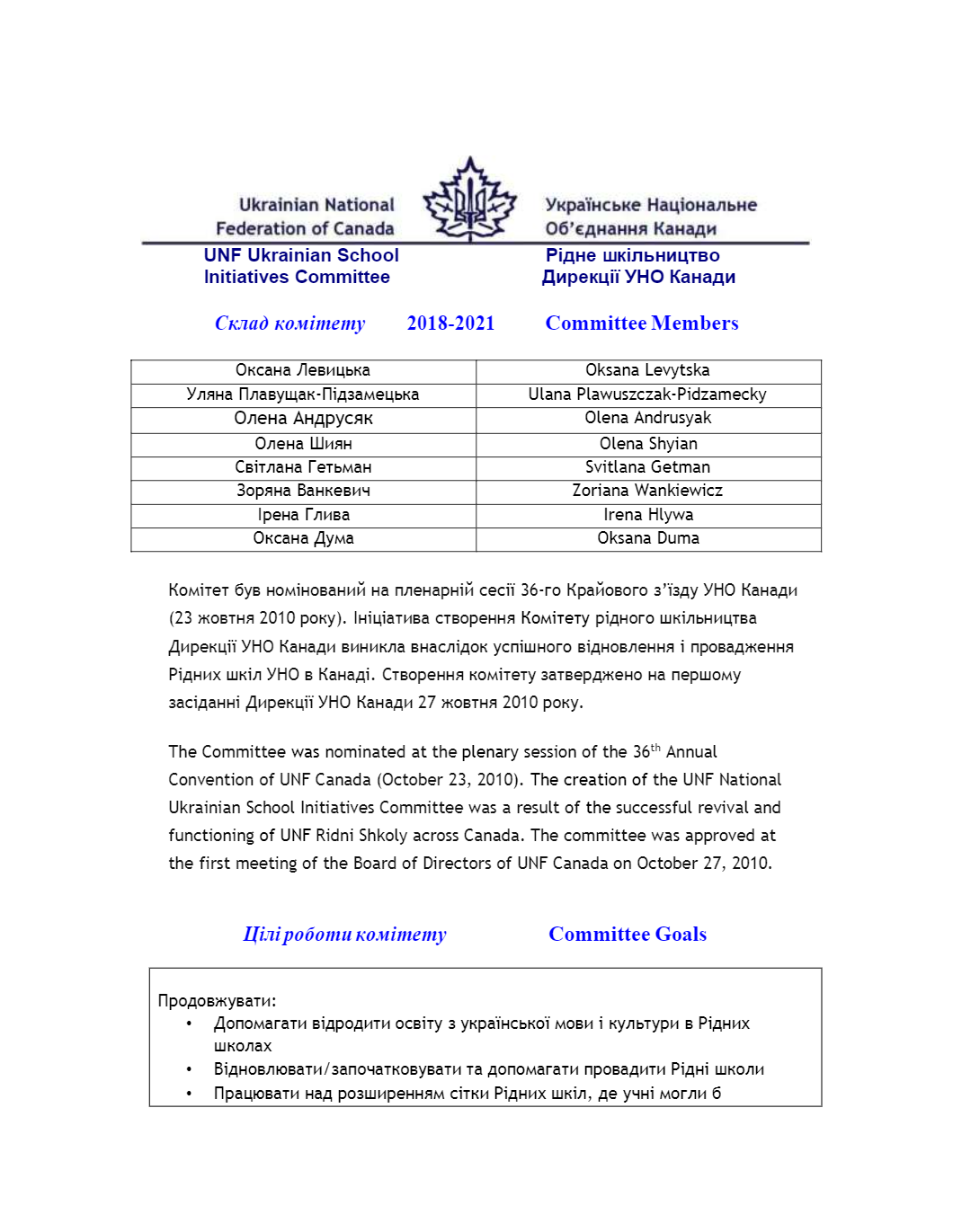