Sports, Education, and Life Aspirations: An Evening with Lucas Makowsky 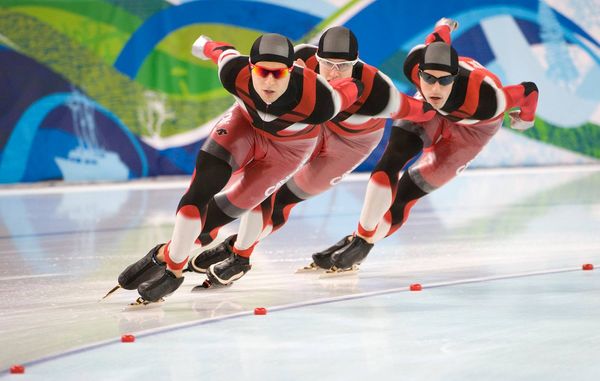 Born and raised in Regina, Saskatchewan, Lucas joined the Regina Speed Skating Club at the age of 6. Not knowing where the sport of speed skating would eventually take him, Lucas’s natural drive and determination became apparent as he started to see success early in his career. At the Provincial level, he won 5 Gold medals at the 2002 Saskatchewan Winter Games, then pushed himself one step further to compete at the Canada Winter Games a year later. Once Lucas reached the Junior International level in 2005, passion for the sport of speed skating took hold and he never looked back.

Lucas went on to represent Canada at several international competitions, racing the 1500m, 5000m, 10 000m, and Team Pursuit events. He captured Gold in the Men’s Team Pursuit at his first Olympic Winter Games in Vancouver. A year later, Lucas continued to surprise by capturing his first individual World Championships medal in the 1500m.

As a result of his successes, Lucas was named Sask Sport Male Athlete of the Year in 2009, received the Taras Shevchenko Medal in 2010, and is now installed in both the Regina and the Saskatchewan Sports Halls of Fame.

Outside of his athletic pursuits, Lucas has always been an active member of the Ukrainian community. Growing up, he spent many summers attending Оселя Тризуб church camp in Saskatchewan, he danced for several years with Tavria Ukrainian Folk Dance Ensemble in Regina, and he regularly took Ukrainian language classes throughout elementary and high school.

Now living in Calgary, Lucas works with Chevron Canada in the field of Petroleum Engineering and sits on the Boards for St. Vladimir’s Ukrainian Orthodox Sobor and the Canadian Olympic Committee Athletes’ Commission.

During his course of the evening, he talked about his participation in the 2014 Olympics in Sochi, Russia. Lucas mentioned that there was no indication that Russia was invading Ukraine at the time. He shared his memories of being very well received by the Russian fans and organizers and how upset everyone became when they learned of Russia’s invasion of Crimea and eastern Ukraine.

It wasn’t an easy feat for Lucas to pull a double major at the university and train for the Olympics at the same time. However, through persistence, determination, and focus he was able to study and train at the same time. No matter where the training took him, he was still available to take a test or write and submit a paper, if studying remotely. However, having established himself as a serious and responsible student Lucas was highly regarded by his instructors and peers.

When talking about becoming an Olympian, and whether it was worth it, he said that he wasn’t there for the money or fame but it was something that he really liked doing and felt he could be the best in. He also mentioned that in the future he would look into an opportunity to be a mentor for a rising athlete no matter the skill level.

Toward the end of the discussion, he mentioned the people who served as an inspiration for his life and professional career, as well as mentioned how we all need to put ourselves out of a comfort zone in order to be successful and feel accomplished.