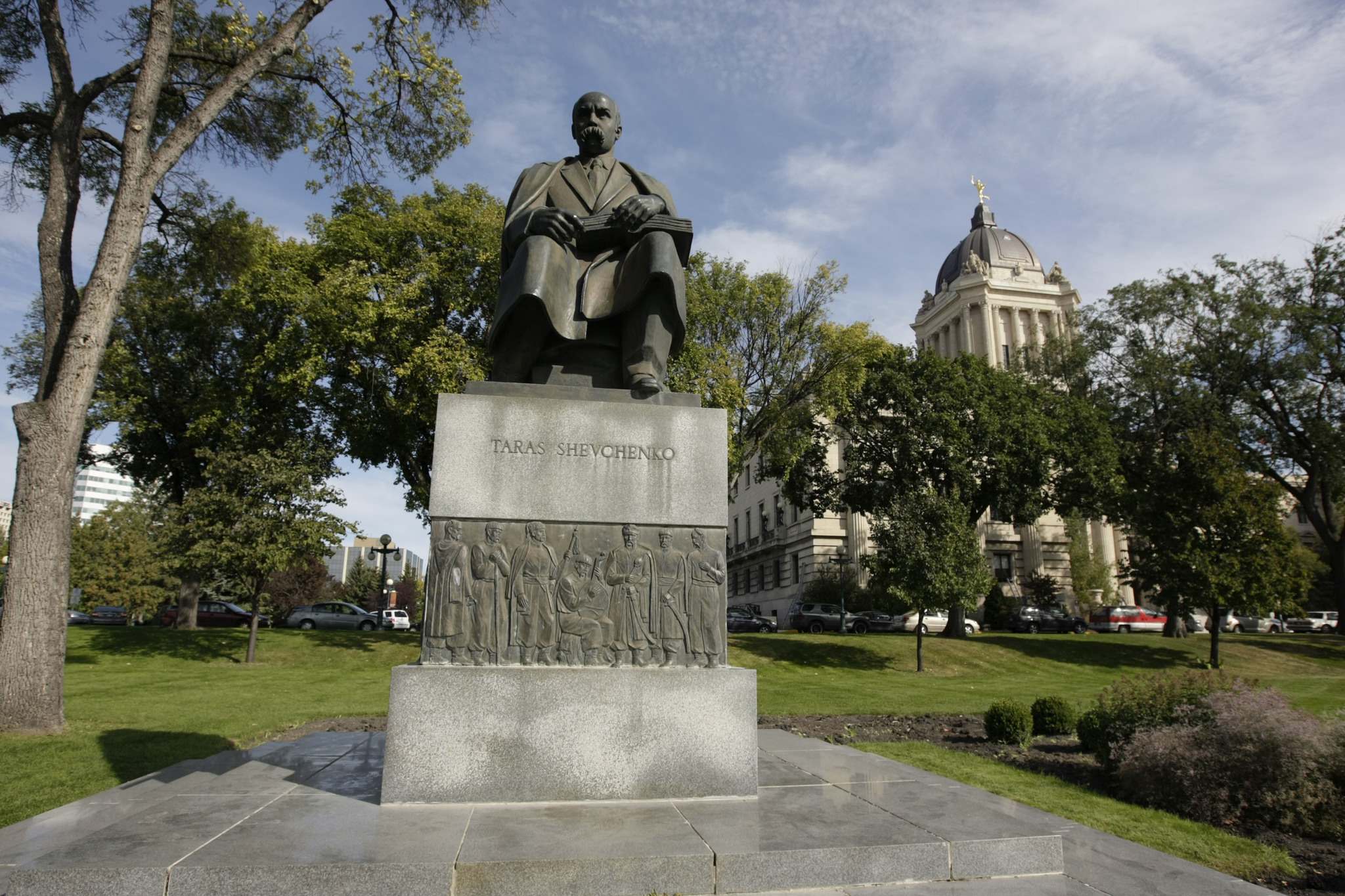 [vc_row][vc_column][vc_column_text]In 1961, the province and country marked the 70th anniversary of the first Ukrainians to arrive in Manitoba with a monument to that country’s famed poet.

To mark Manitoba’s 150th anniversary in 2020, the Free Press will feature weekly an article from the archives of the Manitoba Historical Society. This article was originally published in September 1961 in the Manitoba Pageant.

Canadians are becoming increasingly conscious of the contributions ethnic groups are making to the development of Canada. The co-operative efforts of all these peoples, with origins predominantly in Europe, have built up a better country in all fields…..economic, political, social and cultural.

One of these prominent segments of the Canadian population is the Ukrainian Canadians, numbering over half a million in Canada. Of these, over 100,000 live in Manitoba, where every eighth person is of Ukrainian descent. Winnipeg, with a concentration of nearly 50,000, is regarded as their “capital”. Here are located the headquarters of the Ukrainian Canadian Committee, which co-ordinates the common activities of nearly 30 Dominion-wide organizations, the metropolitan archbishops of the two Byzantine-rite Ukrainian churches and several publishing firms with leading newspappers.

This year the Ukrainian Canadians are celebrating the 70th anniversary of their settlement in this country. It was early in September 1891, that the first two Ukrainian settlers arrived in Winnipeg. Wasyl Eleniak and Ivan Pillipiw initiated the flow of Ukrainians into Canada.

The Ukrainian Canadians commemorated this anniversary by erecting a monument in honour of their greatest poet, Taras Shevchenko, as this coincided with the centenary of the poet’s death. Under the auspices of the Ukrainian Canadian Committee, over $150,000 was raised throughout Canada for this purpose. Since this was $30,000 in excess of the costs of the monument, the remaining sum was transferred to the Ukrainian Canadian Foundation to promote cultural projects. The bronze statue was sculptured in New York by Andrew Daragan, who was assisted by Roman Kowal of Winnipeg.

Almost every Ukrainian knows some of Shevchenko’s inspiring poetry, which has been translated into the leading languages of the world, including English. The inscription below the statue describes Taras Shevchenko (1814-1861) as the “National Poet of Ukraine, Champion of Justice and Freedom for All.” And underneath these words is found the quotation “He revived and inspired a nation down-trodden by oppression — and fearless appeal to right and truth speaks as eloquently in our time as it did in his.” This man of lowly birth, who used his rare talents of poetry and painting to fight Russian tsarist tyranny for the rights and dignity of the common man and for freedom of his and other subjugatednations and who suffered a martyr’s fate in exile, is today the most revered man among Ukrainians throughout the world.

Preceded by a long and colourful parade, the unveiling of the monument on the Legislative Building grounds of Manitoba took place on July 9, in the presence of a very large mass of people from all parts of Canada and the United States, numbering over 40,000. Witnessing and participating in the ceremony were the highest dignitaries of the federal and provincial governments, the metropolis, the university, the Ukrainian churches and organizations and representatives of several ethnic groups in Canada and the United States.

The unveiling ceremony was opened by Monsignor Dr. W. Kushnir, President of the Ukrainian Canadian Committee. Premier Duff Roblin brought greetings from the Government of Manitoba and, after quoting a stanza of Shevchenko’s poetry in good Ukrainian, made the announcement that Ukrainian would be introduced as an elective subject, beginning in Grade 9. The act of unveiling the Shevchenko monument was performed by Prime Minister John Diefenbaker, who stated Shevchenko belonged not only to the Ukrainians but to all of humanity. At this time, the band from Chicago, the
large Ukrainian choir and the people rendered Shevchenko’s solemn Last Testament. Then followed brief addresses by Metropolitan Ilarion Ohienko, head of the Ukrainian Greek Orthodox Church, and Metropolitan Maxime Hermaniuk, head of the Ukrainian Catholic Church, who also spoke in French.

The Shevchenko Centenary Celebrations lasted two days, during which time Portage and Main were decorated with Canadian and Ukrainian flags. On Saturday morning, July 8, a large parade of Ukrainian veterans and youth organizations marched to the Cenotaph, where a ceremony was performed and a wreath laid in remembrance of the great poet. That evening a youth festival, paying tribute to Shevchenko, was held before an audience of 10,000 at the Winnipeg Arena. The
program included a children’s choir of 350 voices, youth and scout drills, mass Ukrainian folk dances, a mixed choir of 200 singers and an address by the Hon. Michael Starr, Minister of Labour, Ottawa, who was introduced by Michael Luchkowich, first Ukrainian federal Member of Parliament.

On July 9, following the unveiling ceremony, a commemorative concert was held at the Winnipeg Auditorium, packed with 5,000 people. Shevchenko’s poetry was rendered in song and music by a large mixed choir conducted by Prof. Y. Barnych of Cleveland and the Winnipeg Symphony Orchestra directed by Prof. Lev Turkewych of Toronto; M. Skala-Starytsky of Paris, France, sang tenor vocal selections. Manitoba Lt.-Gov. Errick F. Willis delivered the message from the Crown.

That evening, a banquet at the Marlborough Hotel, with 1,100 people in attendance, concluded the Shevchenko celebrations. In his speech, Prime Minister Diefenbaker dwelt upon the achievements of the Ukrainian Canadians during the past 70 years, emphasizing their progress in every walk of life, their love of liberty and their love of cultural things, all of which is being woven richly into the Canadian pattern of life. Special Shevchenko medallions were awarded to the following persons who have made significant contributions to the realization of the monument or to the popularization of the poet’s works and cause: Premier Roblin, former Premier D. L. Campbell, Dr. W. Kirkconnell, President of Acadia
University and Prof. G. W. Simpson, retired head of the History Department, University of Saskatchewan, Monsignor Dr. W. Kushnir, Reverend Dr. S. W. Sawchuk, W. Kossar and T. Kobzey, founding members of the Ukrainian Canadian Committee.

And so today, in front of the Legislative Building of Manitoba, stands a new monument of a new friend on the Canadian scene, Taras Shevchenko, a symbol of the lasting contribution of the Ukrainians to the many-sided development of Canada.

For more information or to become a member of the Manitoba Historical Society, call 204-947-0559 or email: [email protected] The MHS is on Facebook, Twitter and Instagram as manitobahistory[/vc_column_text][vc_single_image image=”8531″ img_size=”full” alignment=”center”][/vc_column][/vc_row]