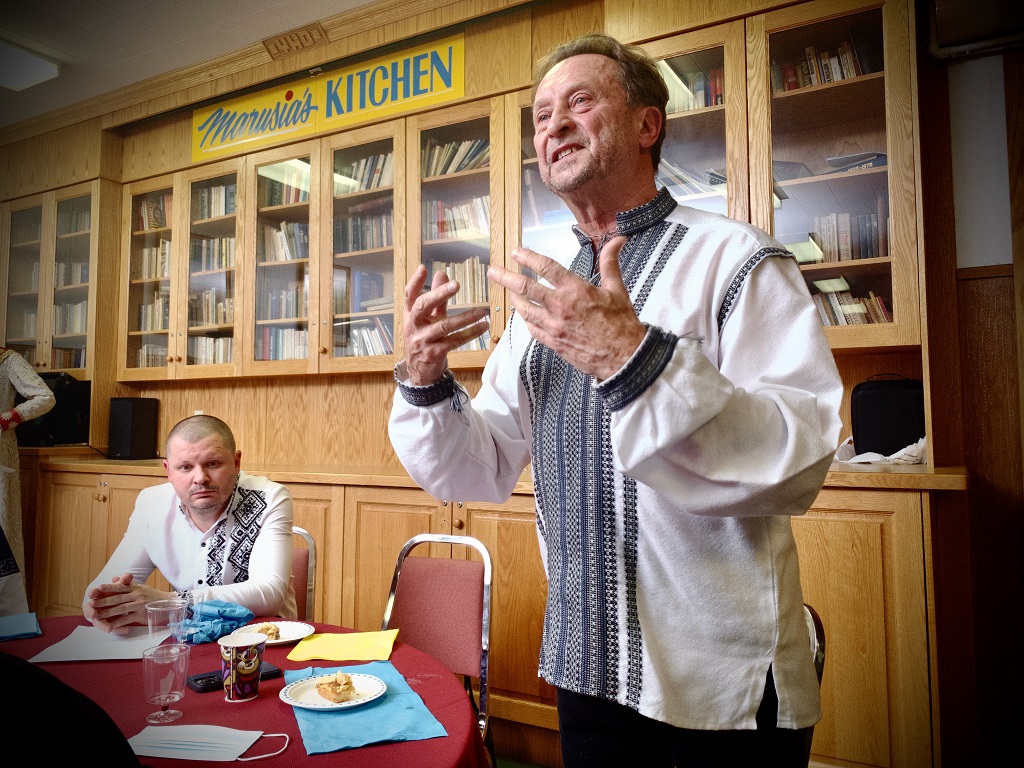 “It was a very condensed tour, but very invigorating and encouraging as a vision for the future,” he told New Pathway – Ukrainian News.

“It looks like the branches are working a lot better than we imagined. There is much talent and a lot of hard-working people out West,” Klufas added.

One of the main topics discussed was preparations for the 90th anniversary of the UNF, which falls in 2022-23.

But that is just the beginning, “the first of 10 steps towards a vigorous and grandiose celebration of our centennial. When you consider that Canada just recently celebrated its 150th anniversary, and we soon will be celebrating the 100th anniversary of UNF, our predecessor members over the years were not just building UNF, they were building Canada,” he said.

Responding to a long-standing invitation by UNF Edmonton Branch President Andrij Lytvynets, Klufas started in Edmonton on Friday, November 26. Before the official meeting with the Edmonton UNF Branch, he met privately with long-time friend Marco Levytsky, past Publisher / Editor of Ukrainian News and current Editorial Writer for the New Pathway – Ukrainian News, about various future opportunities in serving our wide Ukrainian Community in Canada.

Lytvynets and Edmonton Ukrainian Women’s Organization President Iryna Kravets-Kuzmicz invited branch members to a dinner meeting which included a lively question and answer session about the wide-ranging activities of UWO and UNF in Edmonton and Alberta. During the evening National Executive Board Member re Cultural issues, Ievgenii Burlaka, introduced Jurij to the directors and members of the Ukrainian Drama Ensemble Suzirya and the Dzherelo Children’s Theatrical Studio who were conducting rehearsals in other rooms of the branch hall at the time.

On Saturday morning, Klufas continued to Regina, responding to an invitation by National Western Vice President Olena Shyian to participate in the UNF Regina Holodomor Commemoration. This was a touching commemoration presented by the 20 plus students of the UNF Regina Ridna Shkola under the direction of school Principal Svitllana Kaniuk. The commemoration was also attended by UNF Saskatoon Branch President Andrij Prokopchuk, who drove in from Saskatoon for the solemn event. Shyian, who is also President of the Regina Branch, invited both Prokopchuk and Klufas to a collegial working lunch with branch members and parents of the school where local branch development was discussed.

“The visit was inspiring, especially after Covid lockdowns as it provided an opportunity for people to get together,” said Shyian.

“This is especially important for small branches like ours out West to meet the National President and to know that he is deeply interested in the work we do,” she added.

That same evening Andrij Prokopchuk and Jurij drove to Saskatoon to a late dinner with the past President of the UNF Saskatoon Branch, Dave Prokopchuk. The next morning Saskatoon President Andrij Prokopchuk hosted a Sunday brunch at the local hotspot with the local branch executive. Klufas said it was “fun meeting VP Justin Norton for the first time and hearing his youthful planning ideas on the various new opportunities” opened up by the recent donation by the National Executive of a trailer intended to be a travelling soup and food service for the various community festivals in Saskatchewan.

Next in line on the tour after a short plane ride was a meeting organized by UNF Winnipeg President Joanne Lewandowsky with Scott Armstrong, President of the Oleksandr Koshets Choir, and Laryssa Semchyshyn, President, Rusalka Ukrainian Dance Ensemble about the cultural hosting of the UCC Triennial in Winnipeg on Oct. 28-30, 2022. Both ensembles established and fostered respectively by UNF in 1947 and 1962 in Winnipeg. Lewandowski is also President UCC Manitoba, who is tasked with local production support for the UCC Triennial. Thus, the meeting was about creating a welcoming cultural experience for delegates of the UCC National convention in Winnipeg in 2022 and highlighting UNF’s 90 Anniversary to be celebrated nationally across Canada in 2022.

The next day Klufas visited with Vitaly Yatsevych, Art Conservator at the Winnipeg Art Gallery, to review the Gallery’s excellent Qaumajug Exhibit as a potential indigenous cultural and historic excursion in Winnipeg.

The final visit was with Yulia Smerzla, PMP, Executive Director of the renowned Ukrainian Cultural and Educational Centre, Oseredok founded by UNF in 1944, to discuss the three-day cultural hosting of National UCC delegates and UNF 90th Anniversary commemorations in 2022. During this last visit, Klufas had the great unexpected pleasure of meeting Oseredok’s prolific long term archivist Zenon Hluscok, who explained in detail the meticulous work that goes into the cataloguing, preservation, storage and exhibit of each of the thousands of archival relics currently and for years under the care of the many professional masters working at the Oseredok in its archives, museum and exhibits.