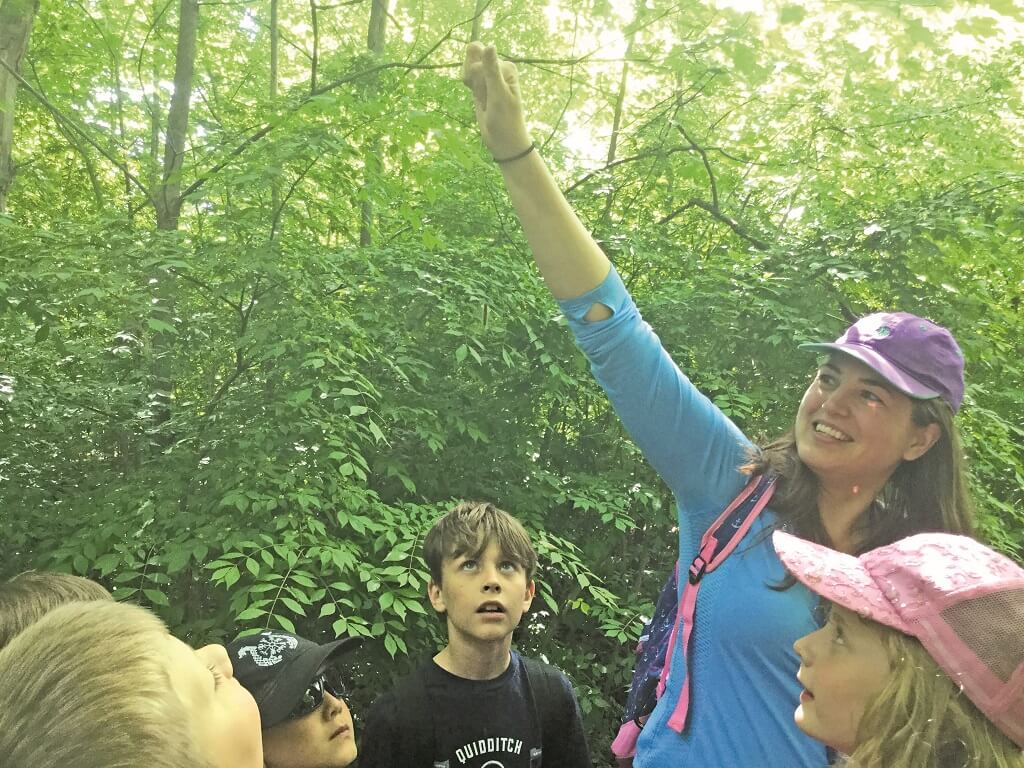 “Is this poison ivy?”

Nine enthusiastic children bombard Anastasia Baczynskyj with questions. The one about poison ivy was repeated on multiple occasions throughout the trip, after she showed them what poison ivy looks like.

Today, Anastasia leads 9 children, three volunteers and me through a hiking trail in High Park. Armed with water bottles, the children strut after Anastasia and listen to a live lecture about nature.

Before they left the security of the Ukrainian National Federation building on Evans Ave. in Etobicoke, the group went over camping and survival essentials. Now it was time to put it all to practice. “You have to integrate theoretical knowledge into live situations and going to a park allows them to learn more than they would in four walls,” says Anastasia. She points to a podorozhnyk (plantain) growing on the side of the road and reminds the children that podorozhnyk serves as a band-aid, and that its stems are edible.

This is the last PA Day of UNF’s new “Strila” program, led by Anastasia Baczynskyj – the Director of Youth Programming at the Ukrainian National Federation of Canada, Toronto Branch. It leads into day camp Soniashnyk, which runs in the summer along with Camp Sokil on Lake Simcoe.

This is the only non-for-profit PA day program in the Ukrainian Canadian community geared for children 6-12. Running monthly during academic breaks, “Strila” allows the continuation of hands-on learning, which the children can continue to use at Soniashnyk and Sokil. “The ideal is to have them learning in a camp environment throughout the entire year,” says Anastasia. “It is about bridging the gap in academic training and bringing in well-rounded adventures that they can learn from and get ready for life.”

The “Strila” program is the evolution of MYHO’s program “Dorist”, meant for youth 14 years and younger. Anastasia brought it back and began rebranding it when she was asked to start children’s programming again at Toronto’s Branch. “’Dorist’ did not have easily recognized symbol, even though it was a very long tradition; it was all but gone by the 1980s. And I thought that it was time to start fresh.”

“Strila” is an ideal name for the program for a few reasons. It fits well into UNF’s flight symbolism tradition, like Camp Sokil (“hawk”) and MYHO’s 1937 flight school in Oshawa. It also honours Ukrainian War Veteran Association of Canada (Українська Стрілецька Громада) – UNF’s founding organization. Strila, or an arrow, is an easily recognizable symbol, and “it’s very campy,” adds Anastasia. The philosophy behind an arrow is that it hits its mark: “You aim, you focus on hitting that target. And the program is about looking ahead and training so that you hit your mark.”

What mark is that? “For them, it’s learning to become leaders. My training program is about well-rounded education, but it’s also about training leaders that have the skills that most people don’t”. Anastasia’s well-rounded learning is composed of four sections: theory (academics: math, physics, bio), practice (applied skills: cooking, life skills), self (leadership: core values, principles) and community (soft skills: communication, relations, culture). These are the elements that Anastasia applies to her programing. “It’s a well-rounded learning because it’s not just academics, it’s all those spheres. Well-rounded education grows them into becoming confident, well-educated, well-cultured. These are the people that you want leading you. And that’s the mark I want them to hit.”

A cheerful birds chorus and police sirens from afar remind me that we’re in a small alcove of wilderness amid the big and busy city of Toronto. Anastasia occasionally throws some trivia at the future leaders: “What’s so special about oak trees in High Park? What’s this tree called? Is it coniferous or deciduous? What does coniferous mean?” They are eager to answer.