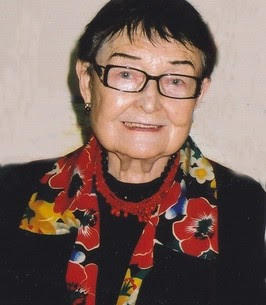 The Ukrainian National Federation expresses its sincere condolences to the family and friends of Mrs. Vera Ke (Kempe) Plawuszczak, who passed away in Toronto on October 23.

In a world where most think “Bigger is Better“, it may be time to re-evaluate and look at the small things around us. She was one of those rare individuals who was larger than life. Ironically, she was small in stature. However, she had a presence that filled an entire room.

I have known Pani Vera since I was 5 yrs old, as a friend of my mother’s. I often saw her at the UNF Toronto College branch, in her office as editor at The New Pathway newspaper. She was inquisitive, always asking questions and writing. Later, I saw her at UNF Ridna Shkola in Toronto West, picking up her daughters. She was also a regular at UWOC events in Toronto. Vera always had a smile on her face and a pen and paper in hand, with a camera around her neck. Even in her senior years, she ran after me asking questions about my life and the hromada. We would wait for Svitohliad to see her weekly segments, especially the cooking ones, which were innovative and funny. I’m sure in this internet age, she would have been a YouTube celebrity.

Details of her extraordinary life are listed below. Her legacy will live on in her children and grandchildren. A wise person once told me “Не той патріот, що дід патріот, а що ВНУКИ патріоти” – “One is not a patriot because his grandfather is a patriot BUT one whose grandchildren are patriots”. “Пані Віра” succeeded on both accounts.

Born in Sambir, Ukraine, in 1927, Mrs. Ke Plawuszczak emigrated to Canada after WWII and joined the Canadian Armed Forces Reserve. A community and civic leader and activist, actress, writer, photojournalist, and television host, Mrs. Ke Plawuszczak inspired many people with her dedication to the Ukrainian Canadian community, leadership skills, wonderful sense of humour and generosity of spirit.

“Pani Vera Ke’s passing is a tremendous loss for our community. Pani Vera left a smile on the face of everyone with whom she spoke. Her passion, kindness and commitment to Ukrainian Canadian causes are an inspiration to us all” stated Alexandra Chyczij, National President of the UCC. “On behalf of our community, I express my deepest condolences to Pani Vera’s family and many friends during this difficult time. Pani Vera will be greatly missed. Вічная Пам’ять!”

In 1995, Mrs. Ke Plawuszczak received the Taras Shevchenko Medal, the highest form of recognition that can be granted by the UCC, for her outstanding national contribution towards the development of the Ukrainian Canadian community.

For decades Mrs. Ke Plawuszczak was an active leader in our community, in the Ukrainian National Federation, Ukrainian Women’s Organization, and many other organizations. She was a presenter on Svitohliad TV, providing editorial commentary and hosting culinary segments, which taught many of us about the history and richness of Ukrainian culture and cuisine. She was a co-founder and archivist of the Canadian Ethnic Journalists’ and Writers’ Club, and a columnist and editor with the New Pathway newspaper.

Mrs. Vera Ke Plawuszczak was predeceased by her husband Roman Plawuszczak (d. 2011). She is survived by her daugthers Ulana Plawuszczak Pidzamecky, Tania Plawuszczak-Stech and three grandchildren. We ask God to remember Mrs. Ke Plawuszczak’s family during this difficult time and to grant her eternal life in гis гeavenly гome.